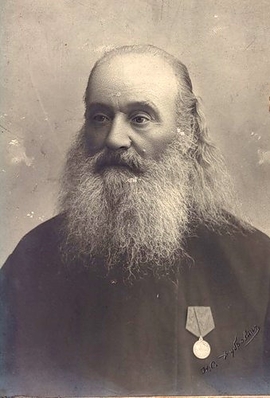 In 1878, he graduated from the Nerchinsk Spiritual School; in 1884 – from the Irkuts Spiritual Seminary; in 1884-1888, he studied at the Kazan’ Spiritual Academy, where he got the Candidate degree in Theology for his composition ‘The Moral Doctrine of Buddhism According the Mongolian Book Uliger-und-dalay, with Russian Translations Supplied’. In 1888, he returned to Irkutsk and entered the East Siberian Branch of the Imperial Russian Geographical Society, in the Museum of which he described its collections on Buddhism and Shamanism, made the catalogue. He founded a museum in the Irkutsk Spiritual Seminary: it included collections for studying Buddhism and Shamanism; he composed an educative book for students: ‘Shamanic Beliefs of Mongols and Buryats’ (1895); he regularly published the results of his own research work in ‘Irkutskie eparkhial’nye vedomosti’, ‘Izvestiya’ and ‘Trudy’ of the East Siberian Branch of the Imperial Russian Geographical Society, in the weekly ‘Vostochnoe obozrenie’, and in ‘Sibirskyi sbornik’. His studies were centered at the religious beliefs of Mongolian peoples: Shamanism, and Buddhism. He knew Buddhist literature quite good, translated it into Russian, analyzed such issues and the conceptions of woman in Buddhist society, Buddhist astrology, quantity of Buddhists in Russia and in the world, and so on. He put a special attention to ethnography, mythology, folklore, and Animism of Buryats. In his last years, P. concentrated at the various aspects of Mongolian and Buryat languages; in 1908, he published ‘The Russian-Mongolian-Buryat Dictionary’, composed by him.