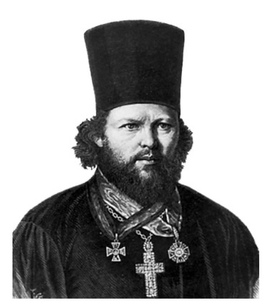 He was born in the family of a priest, studied at the St Aleksander Nevsky Seminary, then – at the St. Petersburg Spiritual Academy; 1811, he graduated from the Academy with the Master degree in Theology (his thesis ‘A Survey of the Book of Psalms: An Attempt of Archeological, Philological and Hermeneutical Analysis’). He worked at the Academy as Bachelor of the Chair of Hebrew Language; since 1818, he was Professor. He worked at the same chair till 1835.

Since 1819, he was invited as Professor of Theology at the St. Petersburg University. Since 1821, he was Doctor in Hebrew Literature. In 1826-1835, he was a personal teacher of the heir, Tsarevich Aleksander Nickolaevich.

Since 1814, he was Director of the Russian Biblical Society, he translated for it texts from Hebrew – the Gospel of St Mathew, particularly.

In 1841, there was a scandal, because his educative translations of Biblical books which had been made at his classes, were published without a confirmation and agreement of P. He was under the Synodal Trial.