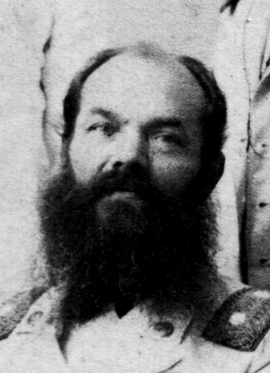 In 1860-1866, he studied at the Tambov Seminary, then, in 1866-1870 – at the Kazan’ Spiritual Academy, at the Missionary Department of Anti-Islamic Disciplines, where he learnt Turk and Arabic languages. His supervisors were N. I. Iliynsky and G. S. Sablukov.

At the Kazan’ Spiritual Academy O. got his Master degree in theology for his thesis ‘Critical Analysis of the Mohameddan Doctrine on Prophets’ (1870, publ. in 1874); he was left there as a teacher in the history and doctrine of Islam, Tartar and Arabic languages. In 1877, he mowed to Tashkent, where he worked as Inspector of popular schools, then he became Director of the Teachers-Training Seminary, and later – Director of the local gymnasium.

He is a founder of the Turkestan Group of the Archeology Fans (1893), Correspondent Member of the Russian Committee for Studying Middle and Eastern Asia (1904).

In 1883-1917, O. was Chief Editor of the ‘Turkestanskaya tuzemnaya gazeta’ Newspaper published in Tashkent. He participated in publication of various literary texts in Uzbek language: ‘Tale of a Fisherman and a Fish’ by A. S. Pushkin, ‘Which do People Alive With?’ by L. N. Tolstoy, booklets ‘Short History of the Ancient Egypt’, ‘Life of Columbus;, ‘On the Profit of Sciences’. ‘Stories on Physical Geography’, ‘Geographical Map of All Parts of the World’, etc. He translated texts; for instance, he translated four Gospels into Uzbek (publ. in 1891, Leipzig); he translated proverbs, folk tales, legends and classical poetry of Turkestan (Makhtumkuli, and Mukimi) from Turk into Russian.

In 1917, he returned to the Tambov Gov., but in 1921, he went again to Tashkent, where taught. He was buried at the Botkinskoe Cemetery in Tashkent.