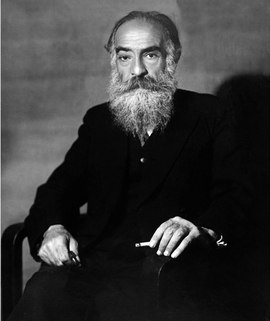 In 1904, he enrolled at the Classic Department of the Historical and Philological Faculty of the St. Petersburg University; graduated from it in 1909. At the same time, in 1907-1911, he visited classes at the Armenian-Georgian-Persian Group of the Faculty of Oriental languages. Among his teachers were: V. A. Zhukovsky, S. F. Oldenburg, V. V. Bartold, P. C. Kokovtsov, B. A. Turaev, but his main supervisor was N. Ya. Marr. Under his supervision, O. Participated in the excavations of the ancient Armenian capital of Ani in 1906-1910.

In 1911-1912, he was sent by the Ac. of Sc. to Turkish Armenia, where he studied and collected materials in the dialect of the Armenian people of the district of Moksa; later he made a special dialectological dictionary.

He made a great input into studying Kurds, their language and culture. He is a founder of Soviet Kurdish studies and organizer of the Leningrad school of this discipline. In Moksa, on the order of Marr, O. started to study Kurdish language, because they live there together with Armenians. He fixed Kurdish folk texts, made a Kurdish-Russian Dictionary with a supplement on paradigms of conjugation of verbs.

In 1914, O. started his teaching as Ass. Docent at the Faculty of Oriental Studies of the St. Petersburg University: he made courses in archeology and history of Armenia, Armenian epigraphy, and in Kurdish language.

He worked also at the Institute of Linguistic (since 1953), studied Kurdish and Armenian languages, worked over dictionaries.