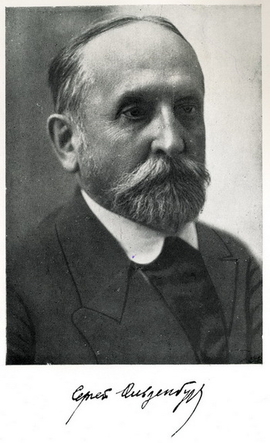 He got the golden medal finishing the First Warsaw Gymnasium (1881); then he graduated from the Sanskrit-Persian Group of the Faculty of Oriental Languages of the St. Petersburg University (1885, Candidate thesis ‘An Essay of Phonetic and Morphology of the Prakrit Dialect of Magadhi’). Master in Sanskrit literature (1895, Master thesis ‘Buddhist Legends. Part I: Bhadrakalpavadana Jatakamala’). A member of a group ‘Brethen’ formed in 1880-s; there were young intellectuals who studied at the St. Petersburg University (among them: V. I. Vernadsky, D. I. Shakhovskoy, A. A. Kornilov, I. V. Grevs). In 1887-1889, O. worked in libraries of Paris, London, and Cambridge, mainly with Buddhist manuscripts. Since 1889, he was Ass. Docent of the Faculty of Oriental Languages of the St. Petersburg University; he also taught Sanskrit at the Historical and Philological Faculty. Since January 1, 1897, he was Professor. In 1899, he left the University in the solidarity with the opposite professors who were fired out.

In 1909-1910 and 1914-1915, he headed archeological expeditions in Eastern Turkestan, in the course of which they found and described numerous monuments of the ancient Buddhist culture. At that, objects which were in need of restoration were transferred to St. Petersburg, where they were included into the collections of the Hermitage and the Asian Museum (later – Institute of Oriental Studies). He initiated several research expeditions to Central Asia and Tibet, he was Chairman of the Ethnographical Department of the Imperial Russian Geographical Society, Secretary of the Oriental Department of the Russian Archeological Society. Since 1916, he was Director of the Asian Museum.

The main themes of his research works included religion, poetry and art, antiquities and history of India, Persian and Western literature, ethnography and history of Oriental studies. In the sphere of the comparative history of literature, O. studied, mainly, the influence of oriental literatures at the medieval European one.

The Master thesis of O. was on the Sanskrit jatakas – tales on the rebirths of Buddha, which formed a great complex of folk fairy-tales. He studied the transformation of Buddhist doctrines in their interaction with the folk milieu. In 1897, he founded an internation cycle of publications ‘Bibliotheca Buddhica: a Collection of original and translated Buddhist texts’. Up to the end of his life, he edited that texts; by 1937, there were 30 volumes in more than 100 issues. There were texts of the tradition of the ‘Northerm Buddhism’: in Sanskrit, Chinese, Tibetan, and Mongolian languages with introductions and scholarly comments, mainly in English, French, and German.