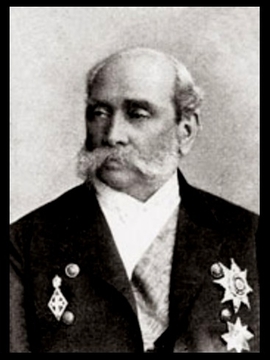 In 1846, he graduated from the Historical and Philological Faculty of the Moscow University. In 1850, he started his service at the Asian Department of the Ministry of Foreign Affairs; in 1860, he was transferred to the European Commission in Syria. In 1865-1870, he was Extraordinary Envoy and Plenipotentiary Minister in Greece; in 1870-1874 – at the same position in Austro-Hungary

Initially, he was interested in the Hussites Movement; he argues for the Orthodox essence of the ideas of Jan Hus. He tried to explain it with the St Cyril and Methodius tradition as if kept in Czech society in spite of the obvious victory of Catholicism. Later, he wrote a detailed works ‘Hus and Luther’. But his defense was prohibited because of the events of 1848 in Austria. So, N. changed his theme and prepared his Master thesis on Sorbian dialects. Later, he returned to his initial sphere of studies and published the book in two volumes in 1859: after the defeat in the Crimean War, in the situation of the international isolation of Russia, the interest to Slavic peoples was growing, and it created better field for his studies. His research was based on the ideas of Slavophilia, and he kept his basic idea about Orthodoxy in the ideas of Jan Hus.