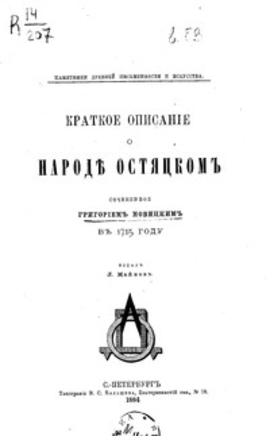 He was from a noble Ukrainian family, studied at the Kievan Mogilyanskaya Academy. For his participation in the Masepa revolt he was sent to exile to Siberia. In 1712-1715, he participated in missionary expeditions of Metropolitan Philopheus (Leshchinsky) to the low tide of the Ob’ River for Christening local Khanty (Ostyak) and Mansi (Vogul).

In 1715, on the base of those expeditions, N. wrote the first ethnographic work in Russian language: ‘Short Description on the People of Ostyaks, Their Life, Habits… Their Former Evil Idolatry, and their Conversion into Orthodox Pious Christian Faith’ (publ. by L. Maikov in St. Petersburg in 1884). Maikov put that book in the row with descriptions made in America by French Catholic missionary J. Lafitau. Maikov also mentioned, that the manuscript of N. was used by Dragoon Captain J.-B. Mueller, who translated it into German in 1716 and published under his own name as ‘Das Leben und die Gewonheiten der Ostiaken’ in a supplement to the work by Hannover Ambassador at the court of Peter the Great F.-Ch. Weber ‘Das Veränderte Russland’ (Hamburg, 1721 – The Transformed Russia), not even mentioning the name of N. That is whey Mueller became the first one who introduced the culture of an unknown Siberian people to Europeans, and N. was forgotten.

In the book by N. there is a special chapter ‘On the Evil Idolatry’ – on religion of Khanty and Mansi. He described their beliefs in a detailed way, comparing them to polytheistic ideas of ancient civilizations – with ‘Babylon and Hellenes’; he noted that the Siberian peoples venerated ‘gods in the image of birds, and snakes, and especially bear’. He mentioned the most archaic beliefs connected with protecting magic and amulets production: ‘Some of them make images neither of animals, nor of birds, but something from woods, covered with leather, cloth, and canvas’. He put a special attention to Shamans whom he called ‘evil minded’ or ‘serfs of lie’ – he ascribed them a desire to get much property from others. In the base of the conception of lie, N. declared, that those ‘handmade false gods’, whom ‘blind people’ brought ‘gifts and veneration’, helped Shamans ‘to be ‘well fed’.