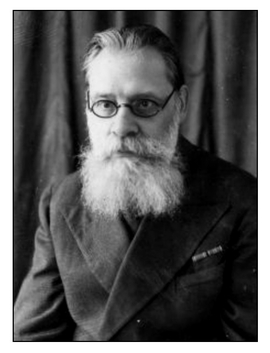 He was born in the family of M. V. Nickolsky, founder of Russian Asyyriology. In 1896, he finished gymnasium with the golden medal and enrolled to the Historical and Philological Faculty of the Moscow University. His Diploma theme ‘Judea under the Maccabees and the Hasmonean Dynasty’ shaped his further interest to the Ancient East and Biblical Studies. He graduated from the University in 1900, taught history in the private female gymnasium of O. F. Protopopova till 1919. In the period of the Revolution 1905-1907, he was close to Social Democrats, participated in their newspapers ‘Bor’ba’ (Struggle), ‘Svetoch’ (Torch), ‘Svobodnoe slovo’ (Free Word) – wrote under the pseudonym Z. Antonov; he also provided space for meetings of the Moscow Committee of the R.S.D.W.P. in his flat. In 1902-1907, he worked for ‘Vestnik Znaniya’ (Herald of Knowledge) Magazine; he also worked at the Pedagogical Society at the Moscow University till its closing in 1908.

In June 1941, N. and his wife failed to be evacuated from Minsk before the Nazi occupation. In 1941, Belorussian underground brought N. and his family from the occupied city to the zone of guerillas. In the spring of 1944, he was sent to Moscow. In the guerillas’ camp N. Kept his studies and wrote two books: ‘Private Landownership and Land Use in Ancient Mesopotamia: On the History of Babylonian and Assyrian Society in the Third – First Millenia BCE’, and ‘Etudes in the History of Phoenician Community and Agrarian Cults’.

He was one of the founders of the laic Biblical studies in Russia. His program of translations provided Soviet and Russian readers with the texts of the leading Western critical research in the field of Biblical studies – both the Old and the New Testament (translations of Wellhausen, Wrede, Schtrauss), as well as works on the history of Early Christianity. He played a significant role in studying the history of the Ancient East; in the discussion on the ‘Asian mode of production’ he took a position which altered from the official one.

On October 30, 1922, he made a report at the ceremonial meeting in the Belorussian University in Minsk – ‘Religion as a Research Object’. He characterized religious studies as a young discipline shaped in the late nineteenth century, which would have a great future solving deep problems of the history of culture. He stressed that for the regular and smooth development of religious studies they would need the atmosphere free ‘from all outer presumptions’ – as for any other sphere of research. On his opinion, historian of religion must have not only formal, but real right to make his research work free and without any reservations and fears, as it is normal for chemist, physicist, mathematician, linguist or ethnologist.