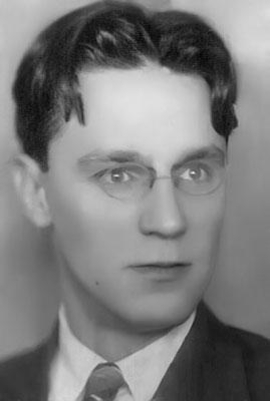 He was born in the family of a honourary hereditary citizen, learnt at the 13th St. Petersburg Gymnasium transformed into the 2nd Soviet Labour School – he finished it in 1922. In 1925, he graduated from the Legal Department of the Faculty of the Social Studies of the Petrograd University. In 1925-1927, he worked as librarian at the Leningrad Krupskaya Communist Political Enlightening Institute; in 1927-1930, he taught social discipline at the Leningrad Agrarian Technical School.

From the autumn 1926, he made public lectures on religion and anti-religious propaganda. In 1929-1930, he worked at the Skvortsov-Stepanov Anti-Religious Labour University. Since 1929, he taught at various institutions of Leningrad (Docent of the Chair of the History of Religion of the Leningrad State Teachers-Training Institute, Docent of the Leningrad Institute of Philosophy, Literature and History, and others). In 1932-1935, he worked at the State Public Library, made reviews of foreign religious and atheistic magazines.

Since 1937, his working place was at the Institute of the Peoples of the North. In 1941, he was evacuated to the Kirov Region: he taught history at the village school, than was propagandist of the evacuation hospital. In 1943-1944, he was Director of the Kirov Regional Lectors Bureau; then – till November 1947, he was lecturer of the Kirov City Committee of Party. In 1944-1952, he worked at the Kirov Teachers-Training Institute (Senior Lecturer, Docent, Head of the Chair of World History); then from 1953 till the end of his life, he was Director of the Regional Museum of Local History.

In his works of 1930-s he shaped the Soviet conceptions of the origin of Christianity based on the theory of ‘dying and resurrecting god’, and the conception of the ‘revolution of slaves’ which destroyed the Roman Empire.