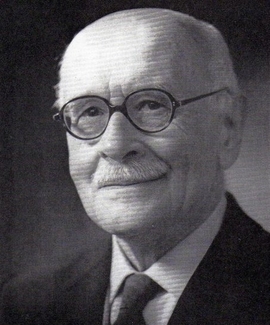 Minorsky Vladimir (1877–1966) – orientalist, specialist in the culture if the peopkes of Persia and Transcaucasia.

In 1896, he finished the 4th Moscow Gymnasium with a golden medal; he kept his further education at the Legal Faculty of the Moscow University; he graduated from it in 1900. Then, he studied at the Lasarev Institute of Oriental Languages till 1903. He was a disciple of Arabist A. E. Krymsky. In 1903, he got a position at the Asian Dep. of the Ministry of Foreign Affairs. Since 1904, he was a member of the Moscow Archeological Society; he served as a diplomat in Iran and Turkey. In 1911, for his book on the sect Ahl-e Hakk, he was awarded with a golden medal of the Section of Ethnography of the Imperial Society of Adherents of Natural Studies, Anthropology and Ethnography.

After the Revolution 1917, he did not return to Russia, emigrated to France. Since 1923, he taught Persian literature and the history of Islam at the National School of Living Oriental Languages in Persia. In 1932, he moved to Great Britain and started to teach Persian language at the University of London. He was Academician of the British Royal Ac. of Sc., and of the French Ac. of Sc., Asian Societies of France and Germany; Doctor Honoris Causa of the Universities of Cambridge and Brussels. Since 1937 – Professor. In 1948-1949, he taught at the University of King Fuad in Cairo. In 1960, he was invited by the Ac. of Sc. of the U.S.S.R. at the XXIII International Congress of Orientalists in Moscow.