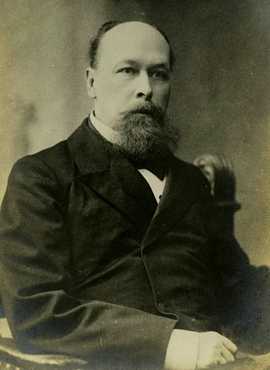 In 1859-1865, he learnt at the Pension of Ennes in Moscow; in 1865, he enrolled to the Historical and Philological Faculty of the Moscow University.

In 1870, he prepared his Candidate paper ‘Eastern and Western Relatives of One Russian Folk Tale’; he stayed at the Chair of Comparative Linguistic and Sanskrit to prepare himself foe a position of Professor. He also taught Latin at the 4th Moscow gymnasium.

In 1871, he was in expedition at Suvalki District, where he collected Lithuanian songs. In 1874-1876, he was in Germany, where he kept studying Sanskrit and the history of the Ancient East. He studied at the Universities of Tubingen, Berlin, and Prague. In 1877, he defended his Master thesis at the Moscow university; the same year, he started to teach the history of the East at the Chair of Comparative Linguistic of the Moscow University. He also taught the history of Russian language and the Old Russian literature at the Gerie High Female Courses (1877).

In 1879-1886, he was several times in Ossetia; the result was his book ‘Ossetia Etudes’. A part of which was included into his Doctor thesis (1883). Since 1892, he was Professor of the Chair of Russian language and literature of the Moscow University; Honourary Professor (1903). In 1897-1911, he headed the Lasarev Institute of Oriental Languages. Professor of the history of the East and Sanskrit.

Since 1881, he was Chairman of the Ethnographical Dep. of the Society of Adherents of Natural Studies, Anthropology and Ethnography. Chief Editor of the magazine ‘Etnograficheskoe obozrenie’.

In 1884–1897, he was Curator of the Dashkov Ethnographical Museum in Moscow.