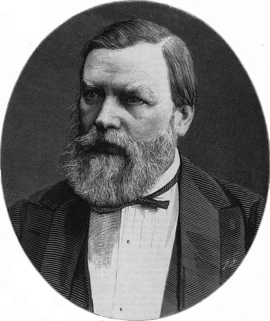 Melnikov-Pechersky Pavel (1818–1883) – writer, historian, ethnographer, specialist in the life of Old Believers and peoples of the Volga Region.

He was born in Nizhny Novgorod and graduated from the Faculty of Literature of the Kazan’ University. Since 1840, he published his articles about the past of the region of Nizhny Novgorod in the ‘Otechestvennye zapiski’ magazine. After his meeting with D. N. Tolstoy, Director of the Trade Fair of Nizhny Novgorod, M. was interested in studying Old Believers and the Church Dissent; he started to collect old printed books, manuscripts, and historical objects. In 1841, he got the rank of Correspondent of the Archeographical Committee; it gave him the right to make searches in the state archives and in the libraries and document collections of monasteries. In 1845-1850, he edited non-official part of the ‘Nizhegorodskie gubernskie vedomosti’ newspaper, where he published materials on the local history. In 1846, on the request of the regional statistic committee of Nizhny Novgorod, he made a description of districts, and, particularly, of the Old Believers’ hermitages. Under his initiative, in 1849, they founded a temporary commission for sorting the old acts. In 1850, on the recommendation of V. I. Dahl, he became a clerk on special tasks at the Ministry of Domestic Affairs; and during his visit to Arzamas he collected folklore and information on the beliefs of Mordvins.

On the base of archival sources and his own observations, for the first time in Russian research tradition, M. described various aspects of material and spiritual life of such peoples as Erzya and Moksha, who populated the regions around the cities of Nizhny Novgorod, Simbirsk, Samara, Saratov, Penza, Tambov, and Ryazan’ in the nineteenth centuries; he classified the data, described their mythology, established the direct and typological similarity of the Erzya-Moksha mythology with that one of other Finnish-Ugric peoples; he also published materials on their wedding rites and folklore.

In 1852, on the order of Emperor Nickolas I, he participated in the collecting data on the quantity of Old Believers in Russia; in parallel, much information on ethnography and a great amount of old documents were found. The results of his work were combined at his ‘Report on the Contemporary State of the Dissent in the Region of Nizhny Novgorod’. In 1857, on the order of S. S. Lanskoy, Minister of Domestic Affair, he made a complete historical and dogmatic description of doctrines of different groups of Old Believers. Those materials were gathered in three volumes of the ‘Collection of Governmental Orders on the Dissent’.

Since 1860-s, he actively used the results of his long observations and research works in his fiction compositions. He got great popularity with his dilogy ‘In the Forests’ and ‘In the Mountains’ on the life of Old Believers of the Volga Region.