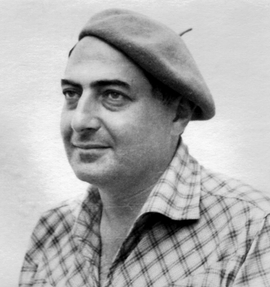 He learnt at secondary school in Moscow; in 1940, he graduated from the Faculty of Literature, Art, and Language of the Moscow Institute of Philosophy, Literature and History; then, he entered the post-graduate courses at the same Institute. During the WWII, he served as military interpreter at the Southern and Caucasian Fronts. In 1942, he was arrested with the accusation in anti-Soviet propaganda and treason; the military trial sentenced him for ten years of camp with the following five years suppression of civic rights. He was released because of the state of health in 1943.

In 1943-1944, he studied at the post-graduate courses of the Middle-Asian State University in Tashkent; in 1945, he defended his Candidate thesis ‘The Romantic Period in the Work of Ibsen’.

He was arrested again in 1949; and in 1950 he was sentenced for ten years of camps at the Kargopollag. He was released and rehabilitated in 1954.

He returned to Moscow, and in 1955-1956, he worked as librarian at the All-Soviet Library of Foreign Literature. In 1966, he defended his Doctor thesis ‘The Origin of Heroic Epic’. In 1956-1994, he worked at the Institute of the World Literature of the Ac. of Sc. of the U.S.S.R. In 1989-1994, he was Professor of the Chair of the History and Theory of the World Culture at the Philosophical Faculty of the Moscow State University. In 1992, he founded and headed the Institute of High Humanitarian Research of the Russian State Humanitarian University.

He edited several important series of publications (Monuments of Written Epic; Research on Folklore and Mythology of the East; Fairy Tales and Myths of the Peoples of the East), encyclopedia (The Myths of the World; The Mythological Lexicon), and collective research projects (The History of the World Literature. Vol. 1-8, Moscow, 1984-1993). He developed the philological traditions of A. N. Veselovsky, and V. Ya Propp, and was interested in structural methods. He was concentrated at the problem of the origin and the following evolution of narrative traditions, the history of archaic and written epics, the genesis of folklore plots – and he studied those themes on the base of extremely broad material. He was also interested in the origin of novel.

For religious studies works by M. on mythology, especially his ‘The Poetics of Myth’, are of special importance.