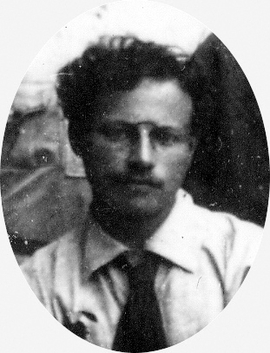 He finished the Tsarskosel’skaya Nickolaevskaya Gymnasium with the silver medal and enrolled to the Historical and Philological Faculty of the Petrograd University, where specialized in the history of the Ancient East. But he has studied for a year only, and in the spring 1917 was mobilized and sent to the Pavlovskoe Military School; after two months, he went to the front of the WWI (in June 1917); a month later, he was sent to the hospital because of the hearth disease, where he spent half of a year; after it, he was demobilized.

In the autumn 1918, he became lecturer and instructor in the extracurricular education in Detskoe Selo (Tsarskoe Selo); in 1919-1922, he headed the Informational Sub-Dep. of the District Executive Committee of Luga (Leningrad region), and wrote articles for the newspaper ‘Luzhskyi vestnik’. During the Yudenich attack at the Civil War, in 1919, he went to the Red Army for a short period.

Since mid-1922, he was in Petrograd, as Secretary of the Chairman of the PetroSoviet and the Chairman of the Executive Committee of the Comintern G. E. Zinoviev. In 1923, he became Deputy Head of the Propaganda Dep. of the Petrograd Committee of the RCP(b). In 1923-1925, he was Researcher of the research Institute of Marxism. In 1924-1926, he was Executive Secretary of the Leningrad Workers’ Committee for the Union of City and Village; later – Head of a Commission of the Central Committee of the VCP(b). At that period, M. was interested in the phenomenon of popular religious views.

When G. E. Zinoviev argued against Stain at the XIV Congress of the VCP(b) (December 18-31, 1925) from the name of the ‘New opposition’, he was taken off his positions. At the same time, M. also lost his positions in Leningrad and was sent to the Pskov Region. There, since August 1926, he headed the Dep. of people’s Education in a small town of Sebezh. He started to study local history, wrote ‘The History of the Sebezh District’.

In the autumn 1927, M. moved to kazan’, where headed the Bureau of Self-Education at the Narkomat of Education of the Tartar Autonomous S.S.R.. He was ordered to organize the anti-religious work. He wrote a book ‘Religion at the Peoples of the Volga-Kama Region in the Past and Present. Paganism. Islam. Orthodoxy. Sectarianism’; since than, studying contemporary religious practices has been an important part of his research.

By the autumn 1928, he returned to Leningrad, and even stayed in the Party. In 1928, he became Docent of the Leningrad State University; in 1931 – Professor. He made a cycle of courses on the history of religion at the Historical Dep. of the Faculty of Linguistic and Material Culture: ‘A Contemporary state of religion in the U.S.S.R.”, ‘The oldest forms of religious beliefs of the peoples of the U.S.S.R.’. At the same time, he made three courses at the Ethnographical Dep. of the geographical Faculty: ‘Double-Beliefs in Russian Village’, ‘Methods of the Anti-Religious Propaganda’, and ‘Shaping the Soviets at the small and retired peoples’; and the course ‘The history of the evolution of social forms’ at the Anthropological Dep. of the same faculty.

In the autumn 1928, M. founded a research group on studying common religion – ‘studying the history of cults’. Regular seminars included post-graduate and under-graduate

students, teachers of Leningrad high schools, researchers of the institutions of the Ac. of Sc., museums and of the Leningrad Bureau for Local History, and the League of Militant Atheists (M. headed the regional Council of the league in the early 1929). The main backbone of the group was formed from disciples of M., as well as researchers of religion, ethnographers, and folklorists. Many participants came from various regions of the country and made their reports at the seminar.

In August 1929, M. was invited as Researcher to the Ethnographical Dep. of the State Academy of the History of Material Culture; later, he headed that department and founded a Commission for building the religious-domestic map of the U.S.S.R.

In 1933, the Institute for Studying the Peoples of the U.S.S.R. was united with the Museum of Anthropology and Ethnography; M. was its first Director. But by the end of 1933, his practical activity was almost completely reduced, it did not suit the ideological approaches by administrative bodies. On December 23, 1933, M. was taken off his position of Director; since January 1, 1934, he was Senior Specialist.

On December 29, 1934, Party Committee of the Ac. of Sc. excluded him as ‘active oppositionist in the past, who had not broken his links with the counter-revolutionary Zinoviev opposition in recent years’. Four days later – in the night from January 2 to 3, 1935, M. was arrested. He was dent to one of the camps in the Middle Asia; in October 1936, he was shot. On March 20, 1958, he was rehabilitated.