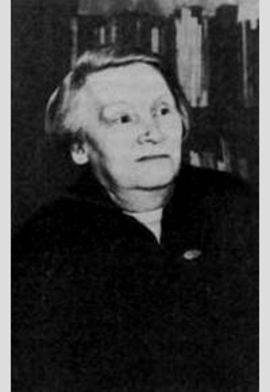 She was born in the family of a Russified Englishman; in 1923, she graduated from the Petrograd University. She studied at B. А. Turaev, V. V. Struve, and N. D. Flittner. She worked at the Hermitage (1921-1965), Leningrad State University (1946-1961), Institute of Painting, Sculpture and Architecture named after I. Е. Repin. She was Deputy Director of the Hermitage on Research Work (1941-1945). In 1946, she defended the Doctor thesis in History ‘The Theban Art of the Twentu First – Fifteenth Centuries BCE’. Professor of the Leningrad State University (1947). Head of the Dep. of the Foreign East of the Hermitage (1953-1965).

She made an original and rather significant input into the studies of the Ancient Egypt. In her article on the formula ‘in your name’ (m rn.k), she proved that the name of the god was necessary for a priest for a magical influence on his will. In her articles on the interpretation of the Texts of Pyramids, M. supposed that the texts should be read in the direction from the entrance into the pyramid and to the sarcophagus with the mummy of pharaoh, because just in that direction the funeral procession moved. The soul of the pharaoh was to be searched for at the entrance, and the ceremony of resurrection took place near the sarcophagus. At that, the opening the doors of the hall symbolized the opening the entrance to the heavens or to the underworld. That hypothesis was proved in the works of contemporary researchers. Another remark of M. explained the rite of opening the mouth and the eyes as parts of the process of the resurrection of the statue of the god. The statue got the new life, when the eyes were opened. On the base of numerous texts and images, she established a link between the vision and life, significant for Egyptians. Studying the Book of Deads, M. found that the text was bought not for the service on it, but with intention to put it in the burial place aside the dead; the Book worked not by itself, but it stopped the heart of the deceased from saying the truth which could hurt him – and it was necessary to help him to get the happy afterlife. She explained the ritual of ‘heb-sed’ according the theory of G. Frazer on the ritual murdering the sacred tsar – as a resurrection of old pharaoh for the eternal life and power.