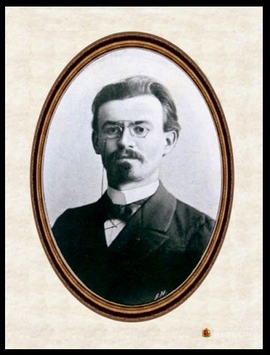 In 1905, he graduated from the St. Petersburg Spiritual Academy; in 1909 – the Historical and Philological Faculty of the St. Petersburg University, and stayed at the Chair of the History of the Middle Ages. He taught Latin and Christian archeology at the St. Petersburg Spiritual Academy; since 1916, he also worked at the Petrograd Archeological Institute. On June 7, 1918, he got his Master degree in Theology. Since 1925, he was Docent of the Leningrad State University. Since 1919, he was Researcher of the State Academy of the History of Material Culture; Senior Researcher of the Russian Museum – there he made a new constant exhibition of the Old Russian art together with N. P. Sychev.

In 1933, he was arrested in the frames of the affair of ‘the Russian National Party’ (the so called ‘The Affair of Slavists’), and sentenced to three years of camps, which were changed with exile to the Northern Region. In 1937, he was arrested again in Petrozavodsk; died on January 15, 1938 in Kargopollag; rehabilitated on November 28, 1956.