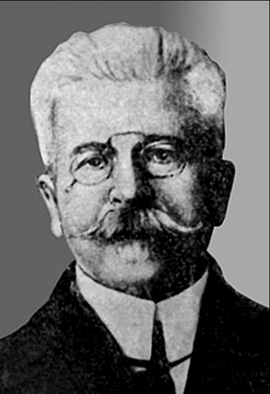 He learnt at the First Kievan gymnasium, then he studied at the Historical and Philological Faculty of the Kievan St Vladimir University. In the course of those studies, he wrote a work on the history of the revolution in the Netherlands. In 1883, he defended his Master thesis ‘The History of the Reformation in Poland: Calvinists and Antitrinitarian’; after it, he got a position of Docent in the World History at the University of Warsaw. Later he became Dean of the Historical and Philological Faculty of the Kievan University. In 1890, he defended his Doctor thesis, awarded with the Macarius Award: ‘The Beginning of the Catholic Reaction and the Decline of the Reformation in Poland’. Since 1924 – Correspondent Member of the Ac. of Sc. He worked at the Rostov (North Caucasian) University. He was arrested and died in prison in 1935 (there are other dates: 1933, 1938); rehabilitated.

His works on the history of the Reformation and Catholic reaction in Poland were of great importance, because introduced new material found by the author in various archives, and thanks to his thorough analysis. In his research, L. put a special attention at the peculiarities of the Reformation processes and at the influence of Lutheran pastors, who were mainly from the adjacent Dukedom of Prussia, vassal of Poland.