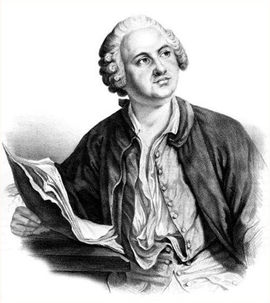 In 1730, he went to Moscow from his native village of Denisovka (now vil. Lomonosovo) to get education. In 1731, he was enrolled to the Slavic-Greek-Latin Academy in Moscow. In 1734-1735, he studied at the Kievan Mogilyanskaya Academy, where he visited lectures in philosophy by Hieronymus Mitkevich. In 1736, he entered the Academic University in St. Petersburg; on October 4, the same year, he was sent to Germany, to Marburg – to study metallurgy. Till 1739, he studied there, visiting classes of H. Wolf in mechanics, and classes of J. G. Duizing in theoretical chemistry. In 1742, he became Adjunct of the physical class of the Ac. of Sc. and Fine Arts in St. Petersburg; and in 1745 – Professor of chemistry of the Academy. In 1746, he was the first in Russia, who made public lectures in physics in Russian. In 1755, the Moscow University was founded; and L. worked out its initial project. In 1758, he headed the Historical Meeting, Geographical Department of the Academic University and Academic Gymnasium. In 1760, the Swedish Royal Ac. of Sc. elected L. its Honourary Member; and in 1764 – Ac. of Sc. of the University of Bologna as well.

He included materials on Slavic mythology in his work ‘The Old Russian History’, into the Chapter 4 of the first part: ‘On Mores, Behaviour, and Faith of Slavs’, and into the Chapter 7 of the second part: ‘On the reign of Prince Vladimir before the Christening’. He mentioned gods mentioned by Nestor the Chronicler: Perun, Khors, Dazhbog, Stribog, Simargl, Mokosh, and Volos. Besides, he included some other names of gods, who had been venerated by Slavs, on his opinion: ‘Pokhvizd, Pokhvist, or Vikhr [Whirlwind] – god of wind, rain and good weather, Russian Aeolus; Lada (Venus), Dida and Lel (Cupids)…Kupala, god of earthen fruits equal to Ceres and Pomona, which they celebrated before the mowing and harvesting..’. He based on the conception that Russian culture was enrooted in the deep antiquity, and he compared Slavic mythology with classical one, taking such similarity especially important to include Russia into the circle of heirs of the classical tradition and to stress its historical commonality with other European peoples. He wrote: ‘Ancient polytheism in Russia, similar to that one of Greece and Rome, is proved additionally to written sources with others. What is the meaning of Polkans of fairy-tales, composed from man and horse, if not the Greek Centaur? Is the Sea Tsar not equal to Neptune, and Chudy – to his Tritons? And Chur – is he not similar to Terminus set on the border between fields?’.