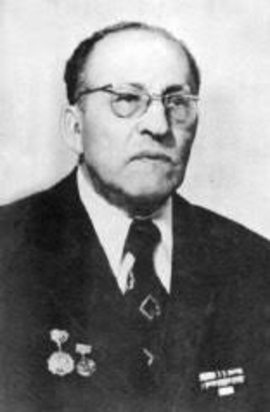 In 1927, after secondary school, he worked as carpenter at the Minsk house-building factory. In 1931, he entered the Belorussian State High Teachers-Training Institute to get economical education, and after it entered the post-graduate courses at the Chair of the World History. In 1939, he defended his Candidate thesis on the social and political struggle in Rome of 60-s, and the Catilina Plot (it was the first Candidate defense in the World History in the B.S.S.R.); in 1940, he became the first Docent in the World History in the B.S.S.R. In July-October 1941, he was in the Army; then he was demobilized because of the state of his health and evacuated. In 1942-1944, he was Docent in the World History of the Kzyl-Orda Teachers-Training Institute (now Kyzylorda) in Kazakhstan.

In 1944, he returned to Minsk and started his work at the Belorussian State University. Since 1947, he headed the Chair of the World History of the Minsk Teachers-Training Institute. His Doctor thesis ‘Class Struggle in Judea, and Uprising against Rome’ provoked political accusations against him; and in 1950, it served a reason of his removal from the position of Head of the Chair. In 1958, he returned to his work at the Historical Faculty of the Belorussian State University. His book ‘Class Struggle in Judea, and Uprising against Rome’ was published in 1957, in spite of the administrative opposition; and only in 1961, L. got his Doctor degree in History. After a special request to the Central Committee of the Communist Party of the U.S.S.R. and to the Ministry of High Education of the U.S.S.R. he received a permission to publish his works on the Qumran texts. Professor (1962); Doctor in Philosophy (1977); Honourary Worker of Science of the B.S.S.R. (1979).

He wrote about the history of free-thinking and atheism, the history of religious studies of the sixteenth-twentieth centuries, and the history of the Reformation. He was one of the first researchers of Soviet atheistic propaganda in 1920-s – 1930-s. His books and articles in Judaism in the Ancient World, and on the Qumran community are of special interest. His works were written on the base of Marxist approach to interpretation of history; and L has never hide his atheistic views.