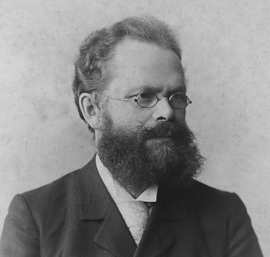 He lost his father rather early and was brought up by his godfather, a clerk from the Tevr’ Gov.; since 1864, he lived in Grodno. In 1865-1872, he learnt in a gymnasium in Grodno, and finished it with the silver medal. Then he was sent with a scholarship to the St. Petersburg Historical and Philological Institute, where they prepared gymnasium teachers in humanitarian disciplines. There L. was interested in epigraphic. In 1876, he graduated from the institute and taught in a gymnasium in Vilno till 1880; then he went to Greece for his further education; there he studied epigraphic under the supervision of W. Koeler and P. Foucart. In 1882, he was invited to work at the complex of Greek and Latin inscriptions from the Northern Coast of the Black Sea.

In 1886-1890, he served as Secretary of the Classical Department of the Russian Archeological Society; since 1903, he was a member of the Council of the Imperial Orthodox Palestinian Society; he also had some other positions, and edited many specialized historical and archeological magazines.

The most important fields of his research: source studies, including epigraphic of the Northern Coast of the Black Sea, and his work with a complex of notes of ancient authors about Scythia, and the Caucasus; and his research works on certain classical plots; and his translation from ancient languages.

In the sphere of religious studies, he wrote about classical beliefs (On the Cult of Ammon in Athens // ZhMNP. 1883, January, pp. 1-23; A New Hymn for Hermes // ZhMNP. 1905, May, pp. 261-264; On the Issue of the Cult of Goddess Deva in Tauric Chersonesus // Collection fo Articles for Prof. V. P. Buzeskul. Kharkov, 1914, pp. 206-214), and about Christian monuments of the Black Sea Coast (On the Ecclesiastic Archeology of Chersonesus // ZhMNP. 1901, October, pp. 15-22, an others); and, besides, he prepared numerous publications of monuments of Byzantine hagiography. He studied some issues of classical religion in his book ‘An Essay of Greek Antiquities’ (Part I: State and Military Antiquities.