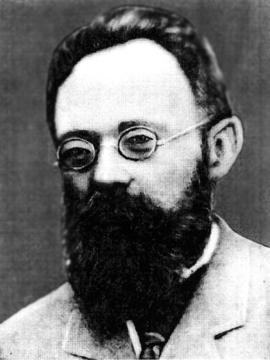 He was born in a peasants family. In 1877, he graduated from the Kazan’ University; then worked as Ass, Docent of the Chair of Ancient Languages and Classical Philology at the same university. In 1879-1895, he was Curator of the University Museum of Ethnography, Antiquities and Fine Arts. In 1885-1902, he worked in Tomsk: the first Director of the Tomsk University Library – one of the best in Siberia. In 1902, he retired and moved to Moscow.

He made lectures in Historical Geography, Library and Museum Work at the Moscow Archeological Institute. A part of his lectures was published: ‘Russian Historical Geography. Iss, I: Merya, Meshchera, Muroma, Ves’ Peoples’. Moscow, 1910; ‘Iss. II: Mordovians’. Moscow, 1912. He studied history, archeology of the Finnish-Ugric Peples: Mari (Cherimis), Udmurts (Votyak), and Mordovians. He made ethnographic expeditions to the Volga and Kama Regions, made excavations in various districts of those regions and in Western Siberia. Member of the Imperial Russian Archeological Society, Russian Gepgraphical Society, Vyatka Archive Commission. He published his works in Finnish, Russian and German Periodicals.

In 1896, together with Writer V. G. Korolenko, he took part in the ‘Multan Process’ as a specialist-ethnographer: he gave testimonies of the absence of ‘blood human sacrifices’ among Votyak People (Udmurtians).