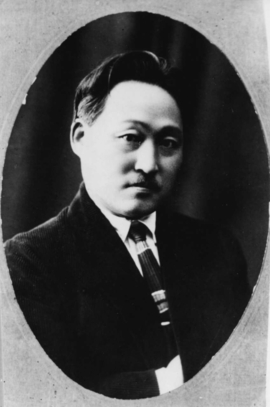 Ksenofontov Gavriil (1988–1938) – specialist in the history, ethnography and folklore of Yakuts, Buryats, Evenks.

Material collected in the expeditions laid in the foundation of the works on folklore, ethnography, and history of the native peoples of Siberia. He considered that folklore kept data on some real historical events, therefore, it would be possible to reconstruct them comparing legends and tales.

In 1930-s, he was Researcher of the Research Institute of Language and Culture of the Soviet of people’s Commissioners of the Yakutskaya A.S.S.R. He was arrested on April 22, 1938 in the frames of the so called ‘Yakutian Affair’. He was sentenced to death; rehabilitated.

He left two big research works: ‘Elleiada’ and ‘Uraanghai-sakhalar: Essays on the Old History of Yakuts’. The first one is a collection of oral folk tales about the legendary initial ancestor and cultural hero of Yakutia – Ellei. Its manuscript was found by P. E. Efremov in 1965, and was published in 1977.