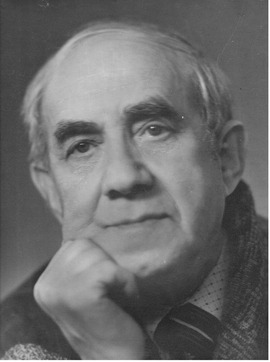 In 1926, he graduated from the Ethnographical Department of the Geographical Faculty of the Leningrad University, where he passed through the courses of L. Ya. Schternberg on religious beliefs. V. G. Bogoraz recommended him to study Nivkhs (Gilyaks).

In 1926-1928, he worked on Sakhalin as school teacher, taught adult Nivkhs to read and write, got a position of representative in native affairs from the Presidium of the Revolutionary Committee of Sakhalin; at the same time, he collected ethnographical material. Since 1935, he was Senior Researcher of the Institute of the peoples of the North, Head of the Group of Paleoasiatic languages. In 1929-1931, he was also Researcher at the Museum of Anthropology and Ethnography. In 1928-1931, he studied at the post-graduate courses of the Chair of Ethnography at the Leningrad State University, prepared his Candidate thesis ‘Phonetics of Nivkh (Gilyak) language’, but he had no chance to defend it because on May 20, 1937 he was arrested with the accusation in ‘Trozkist-Zinoviev espionage and terrorism’ for Japan and sentenced to ten years of camps. There, in Kolyma, he studied local northern languages: Yukaghir, Koryak, and Evenk. He got freedom in May 1947, but it was prohibited to live in big cities. He wrote another thesis in Yukaghir language, and in February 1949 defended it. In 1949, he was arrested again and set to the Krasnoyarsk Region. Receiving freedom in 1954, he worked on contracts either the Publishing House of the Ac. Of Sc. of the U.S.S.R. In 1955, he was rehabilitated and got a position of Researcher at the Leningrad Branch of the Institute of Linguistic. In 1971, he defended his Doctor thesis on the forms of verb in the Ket language.

In the frames of his ethnographic research, he studies religious beliefs and cosmogonic ideas of Nivkhs and their mythology.