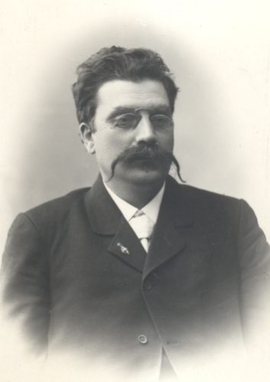 In 1881, after a gymnasium in Kaluga, he enrolled at the Legal Faculty of the Moscow University, where he studied canonic law under the supervision of A. S. Pavlov (1832-1898). In 1889, he was sent by the Ministry of Education for studies in libraries of Wien, Rome, Florence, and Munich. In 1892, he became Ass, Docent at the Legal Faculty of the Moscow University and made lectures in canonic law; since 1893, he was Professor of the Chair of Canonic Law at the Yuriev University (Dorpat/Tallinn). He took part in the foundation of the first Russian Research and Literary Society at the Yuriev University, the Society for the Support of Students in Need; he was also Deputy Chairman of the Russian Public Library in Yuriev, churchwarden of the University Orthodox church, honourary magistrate of the Yuriev-Verr Court Distirct.

In 1906, as a specialist in canonic law, he participated in the work of the Pre-Council Meeting; in 1917-1918, he was at the Local Council of Russian Orthodox Church as a deputy from the Yuriev University. There is no information about him after 1918.

He wrote much about various aspects of canonic law and approach of Russian Orthodox Church and Russian State to Chrisitans of other confessions. In 1892, he published his Master thesis ‘Interpreters of the Canonic Codex of Oriental Church: Aristenos, Zonaras and Balsamon’; in 1901, at the Kazan’ University, he defended his Doctor thesis ‘Other Confessions in Russia: Position of Non-Orthodox Christians in Russia’, which was later published several times (the third publ. under the title: ‘On the Issue of the Freedom of Confession and Religious Tolerance: Other Confessions in Russia. Vol. I. Position of Non-Orthodox Christians in Russia’.

Died in besieged Leningrad in 1941.