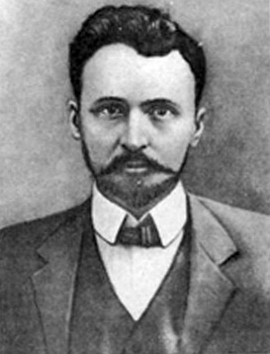 He graduated from the legal Faculty of the St. Petersburg University by correspondence; since 1892, he participated in the revolutionary activity; was arrested as a member of the Communist Party, spent some time in a single camera of the St Peter and Paul Fortress, was sent to exile. After the October Revolution 1917, he actively participated in building the Soviet policy in the field of relations between State and Church, he was a member of the commission for working out the Decree on Separation of Church from State, and School from Church; in 1922-1924, he headed a department of the Narkomat of Justice which fulfilled that Decree and put it into life, coordinated central and local state institutions, prepared legal acts, etc. In 1919-1924, he was Chief Editor of the ‘Revolutsiya i Tserkov’ (Revolution and Church) Magazine of the Narkomat of Justice; there he criticized religion and wrote propaganda articles about atheism. He was active participant of the League of Militant Atheists (since its foundation in 1925). In 1924-1933, he was Procurator of the Supreme Court of the U.S.S.R.; in 1933-1938 – Deputy Chairman of the Supreme Court of the U.S.S.R.