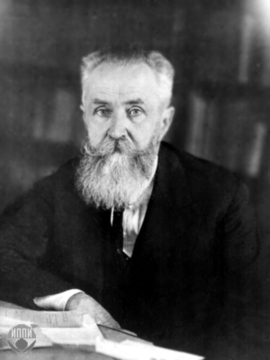 In 1901-1905, he studied at the Faculty of Oriental Languages of the St. Petersburg University, at the Arabic-Persian-Turkish-Tartar Department; he studies Arabic language and literature at the classes of A. E. Schmidt, N. A. Mednikov, V. R. Rosen; historical disciplines – at V. V. Bartold, Persian language – at V. A. Zhukovsky, Turkish language – at P. M. Melioransky, Ethiopian language, history and literature – at B. A. Turaev. He got the golden medal for a composition in Arabic literature ‘The Reign of Caliph al-Mehdia’. In 1908-1910, he was sent by University to Syria and Egypt. Later, he described his travels in the book ‘Over the Arabic Manuscripts’. In 1910, he became Ass. Docent, and in 1918 – Professor of the St. Petersburg/Petrograd University; in 1910-1917, he was Curator at the Rosen Oriental Seminar. In 1913-1914, he was Secretary of the Oriental Department of the Russian Ac. of Sc. In 1921, he was elected for Academician of the Russian Ac. of Sc. In 1938-1945, he was Vice President of the Russian Geographical Society.

He wrote numerous works on literature and language, history and culture of Arabs. He systematically studied the contemporary Arabic literature, classical Arabic literature, Arabic poetry and metric. He described Arabic manuscripts of Russian collections, studied Russian-Arabic literary contacts. He studies Arabic Christian literature, Ethiopian medieval literature and culture, historical-cultural and epigraphic monuments of South Arabia. He is well-known for his research in the history of geographical texts in the countries of the Moslem East (seventh- late eighteenth centuries), and the author of the academic translation of the Quran into Russian (Moscow, 1963).