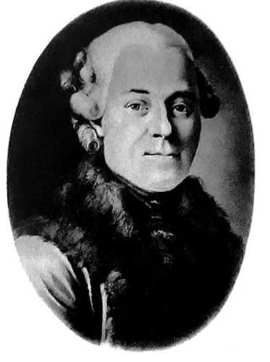 After the Kievan Mogialyanskaya Academy, he kept his studies at the University of Leipzig. He knew well Latin, Greek, French, and German languages. Since 1756, he taught at the Academic Gymnasium in St. Petersburg. He wrote articles for magazines ‘Trudoliubivaya pchela’ (Laborious Bee), ‘Vsyakay vsyachina’ (Sundries; he was, possibly, the Chief Editor of that weekly magazine since 1769). Since 1758, he made lectures in philosophy and literary disciplines at the Ac. of Sc., later he became Academic Councilor. Since 1765, he served at the court of Catherine the Great – as an Assistant, later as the State Secretary.

He worked at the special Meeting ‘on the translation of foreign books into Russian’; he translated a number of contemporary authors, including the works on variola vaccination; in 1772, he translated ‘Metamorposes’ by Ovid into Russian, and ‘Instruction’ by Catherine the Great and some works by M. V. Lomonosov into Latin.

In 1759, he composed the work ‘On the Benefit of Mythology’, where he considered mythology as a special kind of the worldview typical for ancient peoples – their knowledge ‘on the nature of things, on their origin, on their peculiarities, and transformations happening in the nature’. He argued for studying mythology not only for understanding ancient poetry in its imagery, but also for the reconstruction of the genuine picture of the ancient knowledge from natural sciences till history and philosophy. He stressed the significance of the ancient mythology as a source of historical data. The Greek mythology told about the past of Troyans, Thebans, people of Athens, Corinth, Sparta. Without the ‘fables of ancient Kamchatka and America actions’ it would be impossible to imagine the history of those peoples.

He based on the theory of natural religion and shared the Enlightenment view on the origin of polytheism: ‘Fear and hope born from ignorance, the most cruel tyrants of the human beings produced… so many gods, that there was no more space in the heavens, on the earth or in the underworld, which would not be full of them… [they] divided them into various ranks, not equal in veneration, and set one ruler over all others, whom they venerated the most’. He noted that mythology demonstrated, how the ‘natural theology’, ‘hidden under the fable’ was transformed into polytheism.