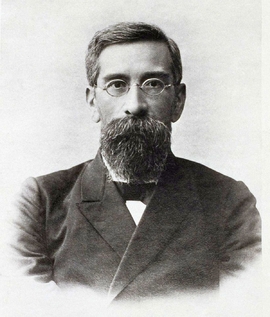 Kondakov Nikodim (1844–1925) – historian of Christian art and Byzantine art, archeologist, creator of the iconographic research method and the new field of Art Studies: the history of Byzantine art.

In 1861, he enrolled at the Historical and Philological Faculty of the Moscow University, where he visited lectures of S. M. Soloviev, S. V. Eshevsky, and F. I. Buslaev. In 1873, he defended his Master thesis ‘The Harpy Monuments from Minor Asia and Symbolism of Greek Art’; in 1876 – his Doctor thesis ‘The History of Byzantine Art and Iconography on the Base of Miniatures of Greek Manuscripts’. Since 1869, he taught at the Novorossisky University in Odessa; in 1888, he was invited to the St. Petersburg University, at the Chair of Theory and History of Art. In 1888-1893, he was also Senior Curator at the Imperial Hermitage; since 1888 – member of the Imperial Archeological Commission. In 1893, he was elected for Academician of the Imperial Academy of Fine Arts; in 1898 – Academician of Ac. of Sc. in Russia, and Correspondent Member of the Ac. of Sc. of France. In 1920, K. emigrated to Constantinople; last years of his life he made lectures at the University of Sofia (Bulgaria), and at the University of Prague (Czech).

He had a vast sphere of influences. In 1876-1891, as a member of the Archeological Commission, he participated in excavations in Kerch, Chersonesos, on the Taman’ Peninsula; in 1875-1876 – in excavations of the necropolis of Nimpheus. In 1891, he headed an expedition of the Imperial orthodox Palestinian Society for studying the antiquities of Jordan, Jerusalem, and the Holy Land. In 1898, he headed a Russian-French expedition to monasteries of the Athos. He traveled much through Europe with research purposes, participated in the foundation of the Russian Archeological Institute in Constantinople, the Committee for Care of Russian Icon Painting, the Committee for the Foundation of the Museum of Fine Arts in Moscow. He was one of the first researches who used photo fixation of ancient monuments in the course of his travels and archeological expeditions for the sake of their further detailed studying and describing.

He was an outstanding specialist in Old Russian and Byzantine art; he built a system of periodization of the Byzantine art, found influences of Greek and Byzantine samples at the shaping of Russian culture and culture of the South Balkan peoples, he demonstrated a genetic relation of the art of the Western Europe, Byzantium, and the Orthodox East. He worked out the iconographical method in art studies based not on the simple description of a single object, but on establishing its typological features and interconnection with other objects of art.