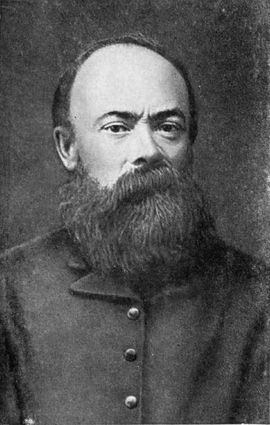 In 1867-1871, he studied at the Physical and Mathematical Faculty at the Kazan’ University, later – at the St. Petersburg University. Since 1871, he was a member of a group of Narodniks at the Medical-Surgical Academy (one of the leaders was N. V. Chaikovsky), which initiated ‘going to the people’. In 1873, he went underground; in 1874-1878, he was in emigration in Europe. Member of ‘Zemlya i volya’ Group (Earth and Freedom); Member of the Editorial Board of the ‘Zemlya i volya’ Magazine (1878-1879). In 1879, he was arrested and in 1881sent to Siberia, to Minussinsk.

In 1894-1896, K. headed the Yakutian (Sibiryakov’s) Expedition; in 1889-1891, he participated in expeditions of N. M. Yadrintsev and V. V. Radlov to Mongolia. Staying in Siberia till 1897, K. made field research, studied geography, geology, ethnography, and archeology of Siberia, Central Asia, and Eastern Turkestan. He participated in shaping the local history museums in Minussinsk and Irkutsk.

In 1887, for his research ‘Antiquities of the Myseum of Minussinsk: Monuments of the Metal Epochs’ (1886) he was elected for Correspondent Member of the Moscow Archeological Society. He wrote ethnographical and travel notes published in the ‘Sibirskaya gazeta’ (Siberian Newspaper) and in the ‘Vostochnoe obozrenie’ (Eastern Review).

In 1897-1901, he was Senior Ethnographer of the Museum of Anthropology and Ethnography; in 1901-1910 – Head of the Ethnographical Department of the Russian Museum.