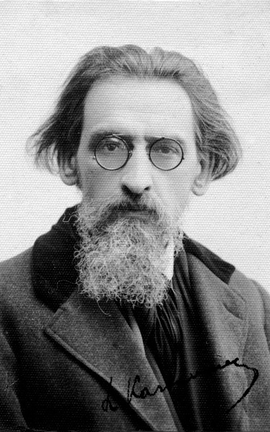 In 1906, he graduated from the St. Petersburg University, where his supervisor was I. M. Grevs. He made lectures at the Historical and Philological Institute, at the High Female Courses, and since 1912, also at the St. Petersburg University. Master thesis: ‘Essays of Religious Life in Italy in the Twelfth – Thirteenth Centuries’ (1913); Doctor thesis: ‘Basics of the Medieval Religious Mentality in the Twelfth – Thirteenth Centuries, Particularly in Italy’ (1916). In 1921, he was elected as Professor of the Social-Pedagogical and legal Departments of the Faculty of Social Studies of the Petrograd University.

In 1922, he was arrested and sent out of the country without a right of return. At first, K. came to Berlin; then, he moved to Paris where he joint to the Eurasian movement: he headed the Eurasian Seminar in Paris, entered the Editorial Board of the ‘Eurasia’ Newspaper (1928-1929), wrote much for it. Since 1927, he made lectures at the Kaunas University, at the Chair of World History. In 1940, he moved to Vilnius.

In Lithuania, K. published ‘The History of European Culture’ in Lithuanian (‘Europos kultūros istorija’, 1931–1937), several dozens of articles on Medieval philosophy and theology at the ‘Lithuanian Encyclopedia’ (Lietuviškoji enciklopedija), and at various magazines.

In 1944, he was prohibited to teach by Soviet authorities because of an accusation in the connections to the Eurasian movement and a participation in an Anti-Soviet plot. In 1949, he was arrested; in 1950, he was sentenced to ten years of camps; he died two years later in the camp in Abez’ (Komi A.S.S.R.); rehabilitated.

Works by K. on the history of medieval monasticism in Europe, on the history of medieval religious mentality are still actual for contemporary religious studies. He entered into circulation a concept of ‘religious fund’ – a typical reaction, or a complex of religious habits of mentality, feelings, and will. On his opinion, each historical period has its own ‘person of the epoch’, as a generalized cultural carrier of a certain ‘religious fund’ of the period. He considered that it would not be reasonable to search for ‘religious fund’ in Scholasticism. He argued for the principal limitations of the individualist and pantheistic mentality; at that, he made strict division between Individualism and Personalism.