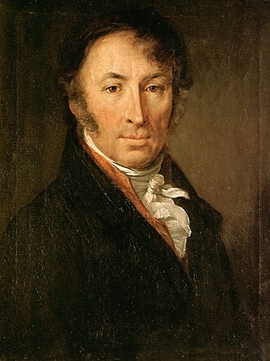 He studied at the Pension of I. M. Schaden, Prof. of the Moscow University. In 1781-1784, K. served at the Life Guardian Preobrazhensky Regiment. In 1789-1790, he travelled in Europe and happened to visit France during the French Revolution, started in 1789. His travel notes were a base of his ‘Letters by a Russian Traveller’ – the first text of such gender in Russia. Having returned to Russia, K. published ‘Moscow Magazine’ (Moskovskyi zhurnal), where he placed his own composition, as well as others, and so he shaped the literary style of Sentimentalism in Russian literature. In 1803, he was officially assigned to be Historiographer and almost stopped to write fiction texts. Political views of K. changed in the course of his life, in the nineteenth century he became a supporter of the idea of enlightened monarchy. In 1811, he published ‘The Note on the Old and New Russia in Its Political and Civic Aspects’, where he formulated the position of Conservative circles. From the moment of his assignment as Historiographer till the last days he worked over ‘The History of the State of Russia’ – one of the first general works on the history of Russia. In 1824, he got the rank of Active Privy Council (the second highest rank of the Empire). Because of his political position, he did not support the ideas of Decembrists, but tried to protect them before Emperor Nickolas I.

In ‘The History of the State of Russia’ K. compared Slavic and Ancient Greek pantheons of gods, but – unlike M. V. Lomonossov – he stressed their differences, first of all: ‘Greeks seemed to had a desire to love their idols, presenting them as samples of human slenderness, and Slavs only had fear; the first ones adored beauty and causality, and the second ones – force; and not satisfied with ugly image of their idols, they surrounded them with abominable depictions of poisonous creatures: snakes, toads, lizards, etc.’. He considered that religion of Old Slavs was based on the veneration of ‘the only and the highest’ White God (Belobog) – they did not build temples for him, and the world evil was imputed to Black God (Chernobog) depicted as lion. He tried to establish a circle of gods mentioned in Russian chronicles: Perun, Khors, Dazhdbog, Stribog, Semargl, Mokosh, and Volos. But he accepted also those names of gods and goddesses which were invented by some authors of the seventeenth and eighteens centuries, for instance: Prov, Pogoda, Chislobog (for calendar), Ypabog (for hunting), and Pripekala (god of lust).A. N. Pypin in ‘The History of Russian Ethnography’ (1892) wrote that K. and his predecessors thoroughly collected names of gods’ and ‘put some readymade moral and natural meanings to them’, and they did not worry that those ‘lifeless images’ went against historical reality.