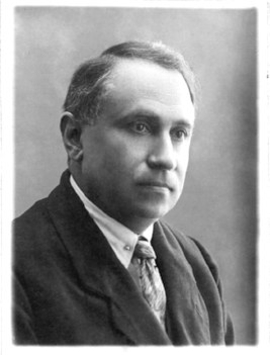 He graduated from the Classical Department of the Novorossiisky University in Odessa in 1906. After it he was invited to stay at the same university and to prepare himself for the Professor position. In 1909-1911, he was in educative trip in Germany, Italy (Rome), and Greece. In 1911-1912, he was Ass. Docent of the Novorossiisky University; Ass. Professor – in 1914-1920, Full Professor – in 1920-1925 at the Kharkov University. In 1913, he defended his Master thesis ‘The Cult of Fetishes, Plants, and Animals in Ancient Greece’ at the Moscow University (it was published in 1914).

He started his academic activity as philologist, but step by step he went to studies of folklore and ethnography, and since 1925 has been completely in that field of research. He worked with the methods of comparative-historical studying ancient religions and used his deep knowledge of classical philology and comparative linguistic and history of ancient cultures. He was one of the first creators of the historical and typological method of studying culture and folklore, offered his own classification of myths, dividing them into naturalistic, psychological, sociological, historical, etymological, and iconic ones. In his classification he took for the fundament specific features of myths, offered by W. Wundt, E. Rodes, W. Rocher, L. Morgan, R. Meyaer, F. M. Muller, W. F. Miller etc; but before him there was no such general classification of myth in all its wholeness and multiple sides. He argued for the Animistic theory of the origin of religion; he considered that Animatism, or general spiritualization of the nature preceded to the shaping beliefs in spirits and soul (Animism). Animatism, as general spiritualization of the world manifested itself in Fetishism, i.e. spiritualization of single objects. According to K., Fetishism declares that there is a spirit, owner, or genius in each object, and it could existed separately – and such beliefs were shaped inside Animatism. So, his ideas were close to those ones by V. G. Bogoraz.

At the Museum of Anthropology and Ethnography he was Curator of exhibitions: ‘Primordial People and Armament’, ‘History of Clothes’, ‘Fire in the History of Culture’, ‘Types of Houses’. He helped Bogoraz to prepare the Anti-Religious Exhibition at the Hermitage (he was the author of the guidebook for it), and to work out the plan of the constant exhibition of the Museum of History of Religion (1932).

In 1942, K. was evacuated from the Blockade of Leningrad to Yessentuki, and died there.