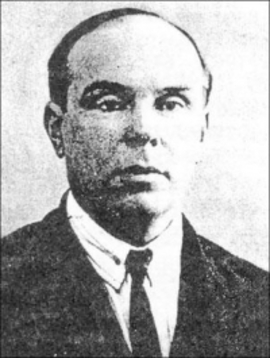 Khudiakov Mikhail (1894–1936) – archeologist and ethnographer, specialist in the history and culture of the peoples of the Volga Region.

Having finished a gymnasium in Kazan’ with a golden medal, in 1913, he enrolled at the Historical and Philological Faculty of the Kazan’ University. He graduated the University in 1918, worked as a school teacher, librarian of the Society of History, Archeology and Ethnography at the Kazan’ University. Since 1919, he was Curator of the Archeological Sector, later – Head of the Historical and Archeological Department of the Govern Museum of Kazan’; and then he taught at the North-Eastern Archeological and Ethnographical Institute. Since 1920, he worked at the Museum Department of the Narkomat of Education of the Tartar A.S.S.R.; he was also one of the organizers and secretaries of the Research Society of the Tartar Studies. Because of political reasons, in 1923, he had to leave Kazan’.

In 1925, he got a position of Researcher at the State Public Library in Leningrad. In 1926-1929, he studied at the post-graduate courses of the State Academy of the History of Material Culture. In 1927, he took part in the Middle Volga Expedition to Chuvash. In 1920-s, he fixed Udmurt epic folklore.

Since 1929, he taught at the Leningrad State University, at the Ethnographical Department of the Geographical Faculty; since 1931, he was Docent of the Leningrad Institute of Literature and History, and at the Leningrad Institute of History, Philosophy and Literature. In 1929-1933, he was Research Secretary of the Commission on Studying of the Tribal Structure of the Population of the U.S.S.R. at the Ac. of Sc.; he worked at the Institute of Studying the Peoples of the U.S.S.R. (1930). Since 1931, he was Researcher of the 1st rank at the State Academy of the History of Material Culture.

He actively participated in the activity of the group on studying the history of cults and popular Orthodoxy at the Ac. of Sc. (Section on studying the religious beliefs of the peoples of the U.S.S.R. under the supervision of N. М. Matorin). In 1936, Kh. got the Doctor degree in History without the defense.

On September 9, 1936, he was arrested as an ‘active participant of the counter-revolutionary Trotzkist-Zinoviev terrorist organization’. He was shot on December 19, 1936. He is rehabilitated.