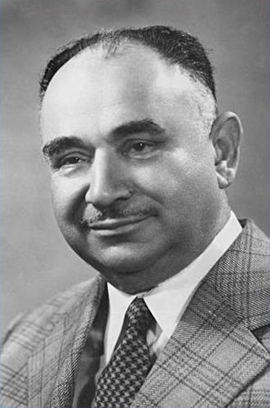 Grigulevich Joseph (1913–1988) – Soviet intelligence agent under non-official cover, later historian of religion, Correspondent Member of the Ac. of Sc. of the U.S.S.R. (1979).

Since the years of his gymnasium learning, he has taken part in the Communist movement in Lithuania and Poland. In 1931-1933, he was arrested and kept in the Polish-Lithuanian jail of Łukiszki for his revolutionary activity. In August 1933, he was sent out of Poland. In 1933-1934, he studied at the High School of Social Studies in Sorbonne (Paris). In 1934, Cominter sent him to the Argentine. In September 1936, he came to Spain through the Comintern lines. In 1937-1953, he worked under cover in several countries of Latin America and Europe.

Having returned to the U.S.S.R. in 1953, he worked at the State Committee on Cultural Connections with Foreign Countries, wrote fiction and research works. In 1957, he published and defende his Candidate thesis ‘Vatican: Religion, Finances, and Politics’ (publ. under the pseudonym I. R. Lavretsky). Since 1960, he worked at the Sector of the peoples of America at the Institute of Ethnography of the Ac. of Sc. of the U.S.S.R.; there he defended his Doctor thesis ‘The Cultural Revolution on Cuba’ (1965). Since 1970, he headed the Sector of Religious Studies and Foreign Ethnography at the same institute. He studied the history of Catholicism and Catholic countries of Latin America. As well as various others aspects of their history and ethnography. He was Chief Editor of the annual publications ‘Races and Peoples’, and ‘Religions of the World’.