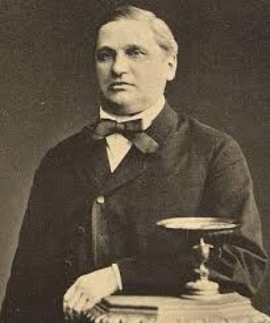 Grigoriev Vasily (1816–1881) – historian and orientalist, specialist in the culture of peoples of Near and Middle Asia, disciple of Ch. D. Frahn and О. I. Senkovsky.

After the graduation from the Historical and Philological Faculty of the St. Petersburg University (1834), G. taught there Persian language (1835-1838). In 1838-1844, he worked at the Chair of Oriental Languages at the Richelieu Lyceum in Odessa. In 1851, he moved to the Orenburg Region, where he took a position of the head of the border expedition, which provided him a possibility to write several articles on the Turkestan Region. As early as in 1837, he offered to the University Council an idea to found a Chair of Oriental History; it was opened at the Faculty of Oriental Languages in 1863, and G. was invited as Full Professor. His knowledge and works on the history and geography of Asia served him for getting the Doctor degree and allowed him to teach the history of Middle Asia – in the situation of a complete absence of manuals and handbooks on that subject. He made lectures ‘Introduction into the Course of History’, as well as the History of the Nomads of Middle Asia, mainly Turks, and the history of the states founded by them in the western part of Middle Asia. He used Moslem, Greek, Latin, and Byzantine sources at his courses.

In 1876, he was elected President at the Third International Congress of Orientalists, which took place in St. Petersburg.

From 1870 till his retirement in 1878, G. was Dean of the Faculty of Oriental Languages of the St. Petersburg University.