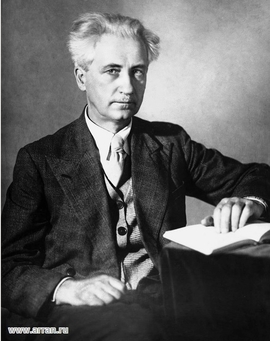 Since 1901, he studied at the Warsaw University. One of his teachers was D. M. Petrushevsky, who made a great influence at G. as historian. Later, on the recommendation of Petrushevsky, G. transferred to the Moscow University. At first, his supervisor was A. A. Kiesewetter, then – M. K. Liubavsky. At the St. Petersburg University he passed Master courses under the supervision of A. S. Lappo-Danilevsky.

In 1914, he got Professor position and defended his Master thesis ‘Novgorodian House of Saint Sophia: An Attempt of Studying Organization and Inner Relations of the Church Votchina’. Beside his studies in the field of social and economical aspects, G. put a special attention to the culture of Slavic peoples, including their beliefs. In 1913, G. became Member of the Imperial Archeographic Commission; there he actively studied monastic life and searches for new sources. For instance, in 1913-1914, he looked through and made a description of the archive of the Big Tikhvin Monastery; and two years later, in 1916-1917, he described and brought to Perm’ the archive of the Solovetsky Monastery.