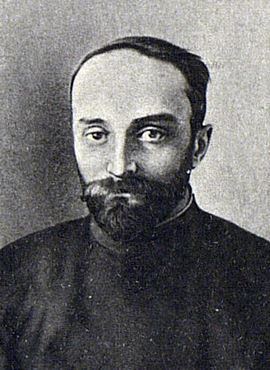 Gorev Boris (1874–1938) – professional revolutionary, writer, publicist. Member of the Union of Struggle for the Liberation of Working Class.

In 1894, he enrolled to the St. Petersburg University; and in 1897, he was excluded from it because of his participation in the Union of Struggle for the Liberation of Working Class. Up to 1917, he was numerously arrested and sent to exile, was in emigration. He actively participated in political activity, was a member of the Foreign Bureau of the Central Committee of the RSDRP, Member of its Central Committee (Menshevik since 1907), Member of the All-Russian Central Executive Committee of the First Call. In 1919, he was arrested. In 1920, he quitted the party and stopped his political activity. In 1921, he was arrested as Menshevik and put into the Butyrskaya Jail. Since 1923, he was Professor of the Faculty of Social Studies of the Moscow State University, he worked at the Institute of Marx and Engels, wrote works in literary criticism and history of Socialist movement. Member of the Society of Political Ex-Convicts. In 1925, he became one of the founders of the Society of Marxist Historians, He was arrested in 1938 in the frames of the affair of Menshevik and SR organizations in Moscow; he was rehabilitated after his death.

In 1928, he took part in discussions about religion at the Communist Academy in Moscow. There, G. made a report ‘The essence of religion’; on the base of ideas of C. Marx and G. V. Plekhanov, he pointed at the role of religion as an ‘organizing element’, and at the position of A. A. Bogdanov in that matter.