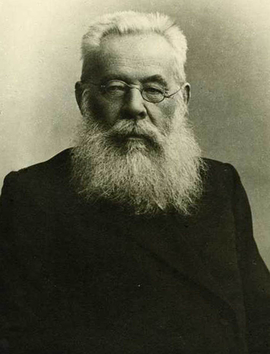 He was born in the family of Priest Evstigney Peskov in Kostroma; he gave his son surname Golubinsky in honour of Russian philosopher Archpriest F. A. Golubinsky.

He learnt at a spiritual school in Soligalich, than he was sent to the Kostroma Spiritual Seminary; after it he enrolled to the Moscow Spiritual Academy and got state grant for education. His Master thesis was on the relations between Church and State in Byzantium in the Fourth – Sixth Centuries; later it was published in the magazine of the Moscow Spiritual Academy. A year earlier G. got a position of teacher in Rhetoric at the Vifanskaya Seminary. In January 1861, he became Bachelor of the Moscow Spiritual Academy at the Chair of the History of Russian Church. He studied the history of Orthodoxy in Central Europe and Balkans; the results were presented in two big books: ‘Stt Constantine and Methodius, Apostles of Slavs’ (1867) and ‘Short Essay on the History of Orthodox Churches of Bulgaria, Serbia, and Romania or Moldova-Wallachia’ (1871). In 1880, G. prepared his Doctor thesis in Theology ‘The History of Russian Church’. Because of political circumstances (death of Emperor Aleksander II), he got his Doctor degree only a year later. He has never finished the second volume. In his late years G. published a new edition of his book on St Sergius of Radonezh. He died in January 1912 in Sergiev Posad and was buried at the cemetery of the Moscow Spiritual Academy.