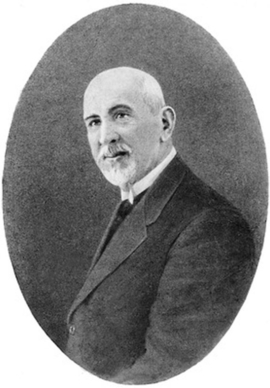 In 1870, he graduated from the Faculty of Oriental Languages of the St. Petersburg University; his supervisors were V. R. Rozen (Arabic), and D. A. Khvolson (Ancient Hebrew); he studied Egyptology and Assyrian studies by himself. Since 1879, he organized expeditions to Egypt for his own account, made archeological excavations, collected written monuments and pieces of art of the Ancient East. Since 1886, he was Curator of the Egyptian and Assyrian collection of the Hermitage, composed the first catalogues for those collections. He prepared the first publications of a number of texts of the Ancient East: ‘Tale of the Shipwrecked Sailor’, ‘Prophesy of Neferti’, ‘Teaching of the Tsar of Heliopolis for His Son Merykara’, ‘Travel of Unu Amon to Byblos’, Cappadocian cuneiform texts from Minor Asia, inscriptions of tsars of Urartu, Fayum portraits. In 1909, he had to sell his collection of antiquities (ab. 600 objects) to the Museum of Fines Arts in Moscow. Since 1910, he has lived in Nizza. In 1924-1929, he was Head of the Chair of Egyptology at the University of Cairo (Egypt). At the same time, G. taught at the Archeological School in Munir, and was Head of the Department of Egyptology at the University of Fuad I in Zaapharan. In 1927, he published texts of hieratic papyri from the Egyptian Museum in Cairo. He was buried at the Russian part of the cemetery in Nizza.

The input of G. into the studies of religion of the Ancient Egypt was quite significant. He approached to Egyptian religious monuments from the point of view of the evolution of religious beliefs, he tried to observe changes in those beliefs, ideas and rites through centuries. Publishing the Metternich Stella – a giant amulet for protection against biting of snakes, scorpions, and crocodiles, G. noted that there was a face of a bearded old man over the head of Horus – it was to symbolize the ageing Sun god, the old or evening Sun. He associated that face with god Bes, who was treated as the Sun god in the late period. On the G.’s opinion, an opposition of young Horus and old Bes was to manifest the eternity of the Sun god, who was always old and always young.

Considerations by G. on some copies of the “Book of Deads’ are of special value. He was one of the first in Egyptology, who observed specific substances connected to the person of Pharaoh, and then to any person, in the Egyptian religion. On his opinion, ‘some parts of the human being, for instance, his body, his outlook, his soul (ba), his essence (ka), either separating from the person – which led him to death, or once again uniting with it – which was, in fact, a resurrection of the dead’. The phrase ‘to go with your ka’ meant to live eternally in the other world, it manifested the idea of human immortality. After his death, a human being was to make peace with his ka. Also, G. noted a connection between life and movement in Egyptian hieroglyphic. Egyptian ‘might be considered himself alive only when he possessed freely his own arms and legs, i.e. might move and do everything necessary for him. Life existed in movement only, and in the absence of movement there was only death’. Reading his hieratic papyri, G. built quite exact picture of Egyptian conception of the afterlife. He argued soundly that it was a transformed copy of the earthen life; but beside it, a man could take any image and move to any place; he could exist safely in a company of gods. As for the pharaoh, he could hope for the resurrection, which ‘provided a dead person with a chance to appear again in the world and to use his new life, every day coming with the Sun god and passing the sky from east to west, or spending time on the fruitful fields of Egyptian Elysium’.

He is also known as the author of textological notes which made clear some aspects of Egyptian religious texts. So, he was the first one who compared an island ka from the text found by him – ‘Tale of the Shipwrecked Sailor’ with the fields of Sokhet-Khetep from the ‘Texts of Pyramids’. He was the first one who correctly translated the epithet of Amon as ‘magnanimous’.

In 1897, G. made a description and translation of Assyrian monuments from the hermitage. Describing the reliefs from the collection of the Hermitage, he put a special attention at the outlook of protecting spirits of tsar (lamassu) and at the objects in their hands, he set a question of botanic identification and symbolism of the sacred tree in the reliefs, and gave the first Russian translations of names and epithets of Assyrian gods.