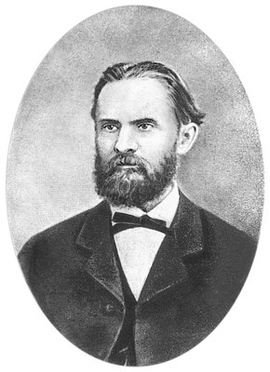 In 1854, he enrolled at the Oriental Faculty of the St. Petersburg University, and graduated from it in 1858, as the first candidate. In 1859, he went to Paris for two years to study Arabic and Turkish languages. His interest to Arabic studies as formed under the influence of Caussin de Perceval and Joseph Toussaint Reinaud. In 1861, G. was sent by the university to the East (Syria, Palestine, Egypt) to develop his Arabic and to study Moslem Law; he was there in 1861-1864. In 1865, he defended his Master thesis ‘Rights of Christians at the East, According to the Moslem Law’. In the same year he became Docent at the Chair of Arabic Literature. In 1873, he defended his Doctor thesis ‘Essays in the Grammar System of Arabs’, where he systematized and analyzed material of previously not published basic Arabic grammar treatises. Together with V. V. Rosen, G. prepared the fundamental ‘Arabic Reading’ (1875-1876) which is still actual. Besides, he composed his ‘Dictionary to Arabic Readings and to Quran’ (1881), wrote ‘A Survey of Arabic Literature’ (1875), and translated and composed a course of Moslem Law ‘Basics of the Moslem Law, According the Doctrine of Imams Abu Khanifa and Shafi’a’ (1882).