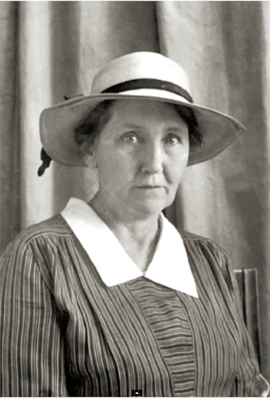 Gagen-Torn Nina (1900–1986) – ethnographer, folklorist. Post-graduate courses of the Leningrad Institute of Comparative History of Literatures and Languages of the West and East (1927-1930); member of the Commission for Studying the Tribal Structure of the Population of the U.S.S.R., she worked at the State Academy of the History of Material Culture, Institute of Anthropology and Ethnography (since 1933), Institute of the Peoples of the North (1931–32). Secretary of the Editorial Board of ‘Sovetskaya etnografiya’ Magazine (1934).

She learnt at the Gymnasium of M. N. Stoiunina, then at the Gymnasium of Princess Obolenskaya. In the autumn of 1918, she enrolled to the Department of Social Studies of the Petrograd University; her teacher was writer Andrey Belyi, She was interested in ethnography, visited lectures by L. Ya. Sternberg. During her student’s period, she worked as lecturer at the Gubpolitprosvet. In 1927-1930, she studied at the post-graduate courses in folklore under the supervision of D. C. Zelenin. In 1930-1931, she lived in Irkutsk. In 1931-1932, she taught Geography, Russian and Ostyak languages at the Institute of the Peoples of the North. Since November 1932, she was Researcher at the Institute for Studying Peoples of the U.S.S.R. of the Ac. of Sc. of the U.S.S.R., and after the foundation of the Institute of Anthropology and Ethnography she became Secretary of the Editorial Board of the handbook ‘Peoples of the U.S.S.R.’. In November 1933, she was transferred to the Department of Siberia and Northern Europe with the task of description its collections; in 1936, she was sent to the Volga Region to study Besermyans and their culture.

On January 3, 1946, she defended her Candidate thesis ‘Elements of clothes of peoples of the Volga Region as material on their ethnogenesis’ at the Institute of Ethnography of the Ac. of Sc. of the U.S.S.R.; but the diploma was given to her in 1956 only. On December 30, 1947, she was arrested once again and sentenced to five years of the Temnikovskie camps (Mordovia). After it she was in exile in the Krasnoyarsk Region.

In the spring of 1954, she returned to Moscow. For some time, she worked at the Fundamental Library of Social Studies, at the State Pushkin Museum of Fine Arts. On February 17, 1956, she was rehabilitated.

Since April 15, 1955 till her retirement in 1960, G. worked at the Leningrad Branch of the Miklukho-Maklay Institute of Ethnography of the Ac. of Sc.