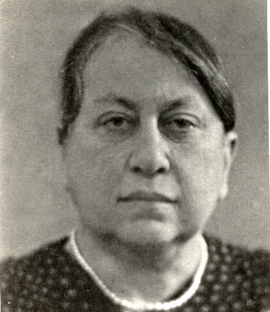 In 1923, she graduated from the Classic Department of the Petrograd University; she wrote her Master thesis ‘The Origin of Greek novel’ (1924) under the supervision of Acad. S. A. Zhebelev. In 1924-1932, she was Researcher at the Institute of Literatures and Languages of West and East (Japhetic Institute of the Ac. of Sc.). Professor of the Leningrad Institute of Philosophy and Literature (1932). Head of the Chair of Classic Philology (1932‒ 1941; 1944‒ 1950).

She defended her Doctor thesis ‘Poetic of Plot and Gender (Period of Classic Literature)’ (1935). The book based on the thesis (1936) had negative review in ‘Izvestiya’ newspaper, and it started a campaign of chasing, which was stopped after the interference of the Narkomat of Education.

During the WWII she did not leave Leningrad, there are her memories about the blockade. From October 15, 1943 till July 1944, she was Professor of Classic Literature at the Herzen Teachers-Training Institute. After the start of the company against cosmopolitism, her works were not published; in 1951, she was fired out from the Leningrad State University.

Her works were dedicated analysis of mythology and folklore; she treated them as a basement and source of classic literature. She developed ideas of H. Usener, E. Cassirer, and L. Levy-Bruhl; she anticipated the newest research in the sphere of ‘archeology’ of cultural forms in the frames of the symbolical theory of culture.