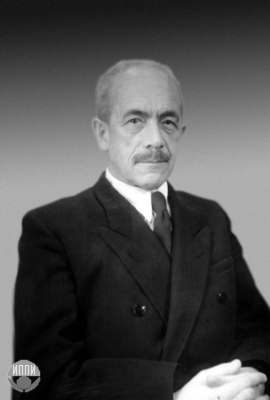 He was a son of Classic philologist Victor Karlovich Ernstedt (1854–1902), Full Prof. of the St. Petersburg University (1891-1902), Acad. (1898). Initial training in Ancient Greek E. took from his father. In 1913, he graduated from the St. Petersburg University (he specialized in the history of Greek language); in 1914, in Greece, he started learning Tsakonian Dialekt, but WWI broke his plans after two months. In 1918, he graduated from the Faculty of Oriental Languages of the Petrograd University and got a position at the Chair of Sanskrit Philology. In August 1918, he transferred to the Asian Museum (later Leningrad Branch of the Oriental Institute of the Ac. of Sc. of the U.S.S.R., now Institute of Oriental Manuscripts of the Russian Ac. of Sc.); till 1936, he worked there as Keeper of the Manuscript Department; from 1936 till 1950 – as Researcher of the Cabinet for Studying Ancient East. In July 1942 – May 1945, he was in evacuation in Tashkent (in 1943– 1944 – Prof. of the Middle Asian State University). In 1924–1930 and in 1945–1950, he taught Coptic language at the oriental Faculty of the Leningrad State University. In 1950–1954, he worked at the Institute of Linguistic Studies of the Ac. of Sc. of the U.S.S.R., in 1954, he was retired.

In 1935, E. got Candidate degree in Philology; in 1941 – Doctor in Philology (in both cases without defense). Since 1946, Correspondent Member of the of the Ac. of Sc. of the U.S.S.R.; awarded with Order ‘Znak pocheta’ (Sign of Honour) and Soviet medals.

The main field of his research was connected with Coptic studies and papirology. He found a fundamental law by Stern-Ernstedt which regulates predication in Coptic language, published texts of Coptic papyri, and (together with G. F. Tsereteli) Greek texts from Soviet collections.

He did not study religious phenomena purposefully, only commented some facts from papyri ad hoc, but the fundament of Coptic studies laid by E., and his paleographic research of manuscripts serve the basement for further studies in the field of Coptic, Gnostic, and Manichaean religious traditions.