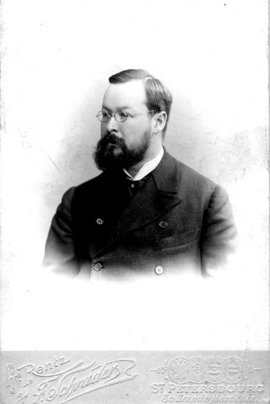 In 1879-1883, he studied at the Historical Faculty of the St. Petersburg University. In 1889, he defended his Master thesis ‘The Dissent on Don in the Late-Seventeenth Century’, and got a position of Ass. Docent at the St. Petersburg University; at the same time, he was a part-time manager at the Department of Spiritual Affairs of Foreign Faith at the Ministry of Internal Affairs, where he made some organizational work for the Russian Archeological Society, Archeographic Commission, Russian Geographical Society. He was a member of the Committee for Protection of Russian Icon-Painting; since 1920 – Correspondent Member of the Russian Ac. of Sc.

Since 1884, and for many years, he has collected Old Believers’ manuscripts, Lubok drawings and engravings, icons, copper casted images, and other objects of the cult from the Old Believers milieu. In 1929, he was fired out of the Archeographic Commission, arrested and sent out of Leningrad. In 1935, he settled in Staraya Russa, and there he died in 1936.

He was the first researcher who studied the history of the Vyg society of Old Believers (Zaonezhie Region) of the Pomorie Group (Bespopovtsy). He attracted attention to their cultural legacy: manuscripts, copper casting, a specific icon style and ornaments, their embroidering and the Lubok art. He composed the first almost the only handbook of Old Believers’ manuscripts – ‘Writings of Russian Old Believers’, and worked out methods of establishing the authorship and the time of creation of those monuments. Beside his interest in paleography and archeography, he put a special attention at studying the social and economical history of Old Believers, and their input into the colonization of the Russian North.