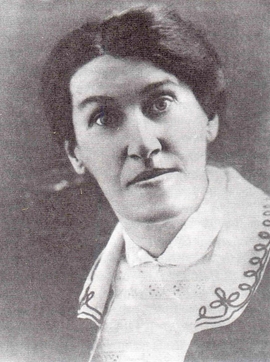 Dobiash-Rozhdestvenskaya Olga (1874–1939) – historian and medievalist, paleographer, writer, Correspondent Member of the Ac. of Sc. of the U.S.S.R.

He made thesis in the history and sociology of religion and the cult of saints in the medieval France. She graduated from the Bestuzhev High Female Coursed in 1899; she was under a strong influence of Prof. I. M. Grevs. He invited her to teach at the Bestuzhev Couses; in 1916, D. became Professor there.

In 1908-1911, she was sent to France, where she got Doctor degree of Sorbonne (Paris) for her thesis ‘La vie paroissiale en France au XIII-e siècle ďaprès les actes episcopaux’ (1911). Having returned to Russia, D. made lectures at the Petrograd University; in 1915, she defended her Master thesis ‘Ecclesiastic Society of France in the Thirteenth Century’ and became the first female Master at that university. In 1918, she got her Doctor degree in World History for her thesis ‘The Cult of St Michael in the Latin Middle Ages’. The research interests of D. laid in the field of the history of the Medieval West. In 1913-1914, she made lectures on the history of the Crusades.

In 1919, she was arrested as a member of the Constitution Democratic Party (CD). Since 1922, she worked at the MD of the State Public Library in Leningrad (now – Russian National Library).