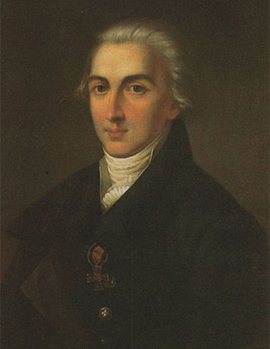 He studied at the Legal Faculty of the Moscow University, in 1761, he was sent by the Ac. of Sc. to Scotland, to the University of Glasgow, where he visited lectures by Adam Smith. He got Master degree in Arts and Doctor degree in Civic and Ecclesiastic Law. Beside Jurisprudence, he studied Mathematics, Medicine, Philosophy, and Ethic. In 1767, D. returned to Russia and became the first Professor of Law at the Moscow University, who made lectures in Russian. In 1768, he became Ass. Prof, in 1773 – Full Prof. Since 1783, he has been Member of the Russian Literary Academy.

On April 22, 1772, D. made a public speech at the Moscow University ‘Legal Reasoning on Things Sacred, Holy and Accepted in Piety, with Demonstration of Rights Existing at Various Peoples…’, where he developed the ideas of the thesis by D. S. Anichkov ‘Reasoning from natural theology on the origin and developing of the natural veneration of God’. Starting from the idea by Anichkov, that ‘inanimate things are venerated because of their unusual actions’, D. made a survey of the ways of veneration of ‘sacred and holy things’ – i.e. fetishes – at various peoples. He compared pagan ideas of sacred objects with Christian ones and mentioned their similarity, noting that sacred places and temples, sacred images and sacred objects existed in all religions.

In 1787, D. quitted because of his illnesses, and he died the following year. His research works were published in the form of public speeches.