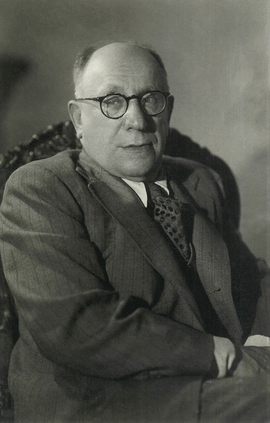 In 1908, he graduated from the Philosophical Faculty of the University of Bern. Since 1920, he has been at the research and teaching work. He worked at the Sverdlov Communist University, at the Institute of Red Professors, at the Marx and Engels Institute. Since 1923, he was a member of the Editorial Board, and then Chief Editor of the philosophic magazine ‘Pod znamenem marksizma’ (Under the Banner of Marxism). In 1924-1931, he was Director of the Institute of philosophy. In 1931, in a decree of the Central Committee of the Communist Party he was accused in the ‘Menshivists’ Idealism’ for his underestimation of the revolutionary turn made with Marxism in philosophy, and taken off all his positions. Since 1935, he has worked in the system of the Ac. of Sc. of the U.S.S.R. He was author of numerous publications in the field of Dialectic Materialism and the history of the philosophy of Marxism. On his opinion, all crises in natural sciences happened because of the lack of Marxist knowledge and – as a result – inability of using dialectic formulae. He believed that the development of science led to the shaping of Dialectic Materialism. On such base, D. and his supporters criticized errors by ‘Mechanists’ who fought for the independence of scientific research from any philosophic premises. In 1920, he (with some others) initiated discussion on the legacy of Spinoza. He demanded to close the Museum of the History of religion of the Ac. of Sc. of the U.S.S.R. as a separate institution.