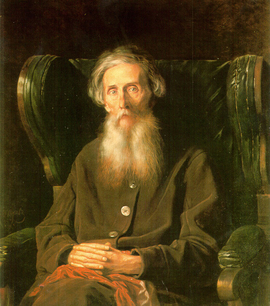 After graduation from the Dorpat University, D. went to military service as medicine doctor. In 1832, he published ‘Russian Folk-Tales from the Oral Tradition Transferred to Civic Grammar, Adapted to Common-Day Life, and Decorated with Popular Proverbs by Cossack Vladimir from Luhansk’; the book was accepted for his Doctor thesis in Philology, but soon the publication was prohibited by censors because of a tale about a small devil and a soldier – they saw a critical hint at the emperor in it.

He is well known, first of all, for his monumental work ‘Explanatory Dictionary of the Live Great Russian Language, in 4 vol.’ (1863-1866); he was awarded with the Lomonosov Prize and elected for Academician for it (1863). Since 1841, D. worked as Secretary of Minister of Internal Affairs L. A. Petrovsky. In 1849-1859, he lived in Nizhny Novgorod, where he kept gathering folklore materials, including those on popular religious practice and beliefs.

Some researchers suppose that D. was the author of an anonymous notes from 1841 about the so called ‘blood libel’ – ‘Inquiries on Murdering Christian Children and Using Their Blood by Jews’; it was published by the Ministry of Internal Affairs in 1844, and later republished under the titles ‘Data on Murdering Christians by Jews for the Sake of Getting Their Blood’ (1878) and ‘A Note on Ritual Murders’ with the name of D. at the cover (1913).