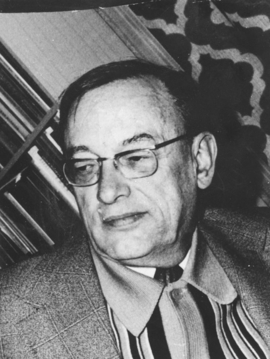 In 1938, he graduated from the Historian and Philological Faculty of the Leningrad State University. Doctor in History (1960), Chief Researcher of the St. Petersburg Branch of the Institute of Oriental Studies of the Ac. of Sc. (1953-1999), also worked at the St. Petersburg State University (till 1949 – Docent of the Chair of Semitic Studies) and at the State Hermitage (1936-1959 – Head of the Dep. of Ancient East). Honourary Doctor of a number of foreign academies and universities (including the Chicago University, and British Royal Asian Society).

His main works were dedicated to social and economical history, ethnology, and languages of the Ancient East (Mesopotamia, Palestine, Minor Asia, Iran). He also wrote on the problems of ethics, philosophy of history, theory of myth, linguistic, and made translations.

One of the first articles by D. was on the origin of the cult of Jesus in the context of the history of Amorites (1939); he based on the works by I. G. Frank-Kamenetsky who was close to Marrism. Following Frank-Kamenetsky, D. compared Jesus Christ with Joshua (Jehoshua), arguing that the source of Christian myth on Jesus had been the cult of dying and resurrecting god Joshua, which had been kept in the lowest parts of the society in spite of Judaic reform prohibiting all gods, except Yahweh. Philosophy of history of D. was built on the border of Marxist theory of formations and French Positivism (Au. Comte). He distinguished eight phases of social structure (primordial, clan-primordial, early ancient, imperial ancient, medieval, stable absolutist post-medieval, capitalist, and post-capitalist); and a possible reason of passing from one phase to another was, on his opinion, improvement of technologies of armament production. According to D., for better understanding each historical phase, it is necessary to study in equal measure its material fundament, its values built in the process of development of social relations of various levels. He treated science and scholarly knowledge as a mighty instrument of protecting life on the planet. In the social sense, he believed that all people would come to the post-capitalist phase step by step; at that, the most developed civilizations helped others in it.

His theory of myth was based on achievements of objective psychology. He interpreted myth as a whole world view, which organized human mentality in the absence of abstract conceptions. Myth appeared as a result of processes, which took place in the cortex and in the central nervous system (so called Sherrington’s funnel), when there was a non-adequate reaction of neurons at the information: a part of outer impressions had no reflections in the social experience and were transformed by conscience into tropes – object-image correlations perceived as similarities and associations; other information was transformed into cause-effect relationships.

for archaic humans, they determined a possibility or impossibility of satisfying social motivations. God as an explanation of cause-effect relationships through a trope was built in the semantic chain. Local pantheons were described by D. as ‘initial causes of motivations, which were characterized with the development of myths – semantic chains in the narrations’. Further development of religion was connected with the development of social relations in the process of migrations and it depended on the improvement of the armament production. He did not believe in God as a personality and had big doubts in existence of all-knowing High Intellect. So, he spoke about the secular character of the future humankind

He is also known as translator from Oriental and Western languages. The greatest of his works in this sphere include the translations of the Book of Ecclesiastes, Akkadian epic on Gilgamesh (Who Saw Everything) – texts on the tragic fate of a man in the world, on the necessity of moral and spiritual growth; they manifested quite pessimistic view on the world.