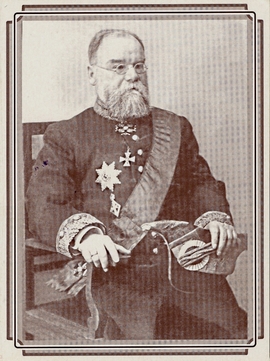 He graduated from the St. Petersburg Spiritual Academy, and Pedagogical Courses of the Second St. Petersburg Military Gymnasium. Since 1876, he taught history, Russian language, and Russian literature in secondary schools of military institutions and those of the Ministry of Education – in the cities of Orel and Moscow.

After defending his Master thesis ‘From the History of Foreign Confessions in Russia in the Sixteenth and Seventeenth Centuries’ (Moscow, 1886), he got a position of Ass, Docent of the Moscow University. In 1887, he became Professor of the Chair of Russian History at the University of Warsaw.

In 1890, he defended his Doctor thesis in History ‘Protestantism and Protestants in Russia before the Epoch of Reforms’. In 1897-1900, he was Professor of the Moscow University. Since 1911, he served as Chief Manager of the Moscow Archive of the Ministry of Justice; he participated in the foundation of the Central Archive of Ancient Acts in Moscow. Privy Councilor.